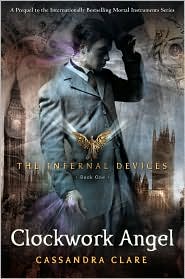 When sixteen-year-old Tessa Gray crosses the ocean to find her brother, her destination is England, the time is the reign of Queen Victoria, and something terrifying is waiting for her in London's Downworld, where vampires, warlocks and other supernatural folk stalk the gaslit streets. Only the Shadowhunters, warriors dedicated to ridding the world of demons, keep order amidst the chaos.

Kidnapped by the mysterious Dark Sisters, members of a secret organization called The Pandemonium Club, Tessa soon learns that she herself is a Downworlder with a rare ability: the power to transform, at will, into another person. What's more, the Magister, the shadowy figure who runs the Club, will stop at nothing to claim Tessa's power for his own.

Friendless and hunted, Tessa takes refuge with the Shadowhunters of the London Institute, who swear to find her brother if she will use her power to help them. She soon finds herself fascinated by--and torn between--two best friends: James, whose fragile beauty hides a deadly secret, and blue-eyed Will, whose caustic wit and volatile moods keep everyone in his life at arm's length...everyone, that is, but Tessa. As their search draws them deep into the heart of an arcane plot that threatens to destroy the Shadowhunters, Tessa realizes that she may need to choose between saving her brother and helping her new friends save the world...and that love may be the most dangerous magic of all.

My Thoughts:
First off, I'll--reluctantly--admit that this is the first Cassandra Clare novel that I've read. However, I can honestly say that I enjoyed it. The flow was steady and there was nary a dull moment. On top of that, I tend to enjoy the particular time period in which the story was set (the Victorian Era or more specifically, Clockwork Angel begins in 1878).

Theresa Gray, known as Tessa, is our main character and though she begins the story blissfully unaware of the paranormal, she is soon tossed into the fray (so to speak) and is forced to learn what she is as well as how to change. Throughout the story, she evolves from a naive young miss into one much more capable of handling the changes in her world.

And then there's Jem, who is often the voice of reason. Originally hailing from Shanghai, the reason for why he has ended up in London is certainly interesting--although sad too. He spends a very large chunk of time with Will--whom is much more brash than Jem and often in a mood. Or rather, Will spends a large chunk of time with Jem due to Jem's particular ailment. To put it simply, they are a very interesting pair.


Overall, I really did enjoy Clockwork Angel. There was just the right amount of romance, the supporting characters was wonderful, and I love that the details didn't overwhelm the story, they just helped clarify the picture a little. Then there were the supernatural/paranormal elements which I thought were rather well done--as was the lore behind each of the paranormal groups. I must also confess that Nate--Tessa's brother--is my least favorite character; the reason behind this is, I hope, rather apparent if you read Clockwork Angel. With that said, I can't wait to see what Cassandra has in store for Clockwork Prince come September 2011!


What did you make of Cassandra Clare's Clockwork Angel?

Posted by Kristin @ Beneath Shining Stars at 9:41 PM