The Collector by Victoria Scott 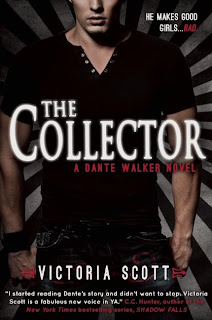 Dante is good at collecting souls. So good, in fact, that the Boss Man sends him to collect Charlie Cooper's soul. The catch? He only has ten days to do it and getting Charlie to sin isn't going to be easy.

Dante is definitely a bad boy. He has no qualms about doing his job and tagging souls. Honestly? That's a part of what makes The Collector so fun to read. Because he's just so unprepared for Charlie despite being so confident in his abilities. Why? Well, she's just so innocent that he really has his work cut out for him! In that sense, she really rattles him--which is ultimately what initiates his inner turmoil (regarding taking her soul).

But the best part of The Collector? It's how Dante evolves as a character. I won't say anymore than that about the plot though. There's demons, angels, soul collectors and their counterpart (soul liberators), and the possibility of war looming--as it does. Plus Charlie's friends, Blue and Annabelle? They're pretty awesome too. I mean, they stick by Charlie's side, stick up for her, and they're sort of adorably protective of her. I feel like I don't know enough about Max and Valery yet to really talk about them; so I'll save that for when I've read the next book.

So there you have it. If you've been thinking about giving The Collector a go, I'd definitely recommend it. And really? It was definitely refreshingly different. It's not like he's instantly taken with Charlie.

Read this if: You like bad boys. You like romances. You like stories involving souls, angels, and demons. You enjoy watching the main character grow (as a person).


The Collector by Victoria Scott
Publisher: Entangled Teen
Release Date: April 2, 2013
Edition: e-ARC
Received for review via publisher and NetGalley.
Posted by Kristin @ Beneath Shining Stars at 5:15 AM