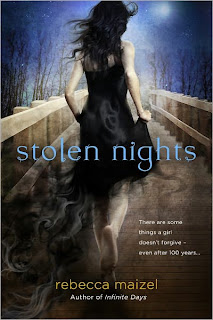 If you haven't read Infinite Days yet and wish to remain spoiler free, you'll want to stop reading now.

Welcome back to Lovers Bay, where Lenah Beaudonte, former Queen of Vampires, now resides. And Lenah's past? It continues to haunt her. A vampire that Lenah turned has arrived in town and she's killing off Lenah's friends, demanding that Lenah give her the ritual. But it's a ritual that should never fall into vampire hands, in particular ones that have terrible intentions such as Odette. Of course, that's not Lenah's only problem. There's the small matter of Rhode--who could be alive. In the end, she'll have to make a choice, one that can change everything.

It's been a while since the first book and it might be a good idea to re-read it before you dive into Stolen Nights for the sake of remembering where Infinite Days left off, but you can also hop right into Stolen Nights if you want to. No, really, I found it pretty easy to re-acclimate myself to Lenah's world despite having not re-read Infinite Days. Also, if you were a fan of Justin in the first book, well, let's just say that his personality isn't wasn't as sweet as it was in Infinite Days.

Expect more flashbacks, more Vicken, and a lot tension between characters. Things definitely get moving early on in Stolen Nights and they consistently keep moving until you reach the end. I think, for me personally, I would've liked the romance and the plot to tie together a bit better. Don't get me wrong, I definitely did like it, but I feel like there's a very particular scene towards the end that would've been perfect for a heart wrenching moment. When you get to the dance, you'll see what I mean. Then there was the use of the month of Nuit Rouge and spell materials that I found to be quite interesting. That intent could essentially change the outcome of a spell and that the meanings behind herbs and plants also played a role in the spells as well

In all, I definitely enjoyed Stolen Nights and if you liked Infinite Days, it's definitely worth reading! I can't tell you anything else and let this remain spoiler free--although I wish I could! Also, I feel like I'd like a companion novel though--or a third book--as I'm left with some questions.


Stolen Nights by Rebecca Maizel
Publisher: St. Martin's Griffin
Release Date: January 29, 2013
Edition: e-ARC
* Received for review via NetGalley and as a part of the blog tour.
Posted by Kristin @ Beneath Shining Stars at 6:17 AM