The Evolution of Mara Dyer by Michelle Hodkin 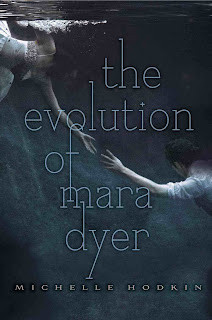 If you haven't read The Unbecoming of Mara Dyer yet and wish to avoid spoilers, it'd be a good idea to scroll past this. However, if you don't mind having some spoilers (for Unbecoming), feel free to read on.

Assuming that you've read The Unbecoming of Mara Dyer already and aren't wondering if you should start the series or not--the answer, by the way, is yes, you should--then you were left with the same questions I had--or so I'd assume. Just what is Mara? Why did she see who she saw at the end of Unbecoming? How does it all tie together? Well, dear reader, you'll get some answers in Evolution, but for most of them? You'll need to wait until The Retribution of Mara Dyer next year.

In The Evolution of Mara Dyer, Mara will struggle to prove that she's sane, learn about her family's past, have several scenes with Noah that you won't want to miss, and confront her demons, so to speak. You'll see many familiar faces and you'll also be introduced to some new ones that ultimately play a very important role throughout Evolution. One of which is Phoebe, a patient at Horizons who is... well, unhinged might be a good way to begin to describe her. If I feel like quoting Mara, well, Phoebe is batshit crazy.

Michelle's writing style gripped me back into Mara's world fairly easily and unlike some books, I found that it was easy to reacquaint myself with the characters and it doesn't suffer from that awkward middle book syndrome. The pieces are starting to fall into place and from what I can tell? The Retribution of Mara Dyer is going to be a mind blowing finale--or, the potential is definitely there. (What? I have really, really high hopes for it!)


The Evolution of Mara Dyer by Michelle Hodkin
Publisher: Simon & Schuster Books for Young Readers, an imprint at Simon & Schuster
Release Date: October 23, 2012
Edition: Hardcover
Purchased on my own.
Posted by Kristin @ Beneath Shining Stars at 3:51 AM