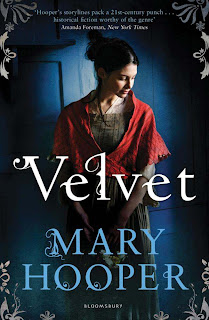 When Velvet is offered a better job, one that will take her away from the life of a laundress, she takes it; at which point she stumbles into the world of Spiritualism and while she adores her Madam, she can't help but feel as if there's more than her Madam communing with spirits going on.

I love the idea behind Velvet; a girl gets elevated--job wise--and finds herself living in a Medium's household. However, for someone who is supposed to be bright, I felt like it took Velvet too long to figure everything out. Maybe it would've worked better--for me, at least--if there had been a reason behind her blind devotion. At least, more than George's pretty face. That's not to say that the focus is on the romance--there's very little of that--but rather, I feel as if Velvet needed more plot. And honestly? My reason for saying that is this: there are a lot of loose threads left at the end of the book. Believe me, when you get to the end, you'll know exactly what I mean. Velvet is a book that I feel could've greatly benefited from an epilogue.

In a nutshell, Velvet was a book that I unfortunately didn't end up loving as much as I thought I would. It flowed nicely, but there just wasn't enough plot to keep me (personally, at least) happy. I do, of course, encourage you to form your own opinions about Velvet if you're looking for a book set at the turn of the century which deals with Spiritualism.