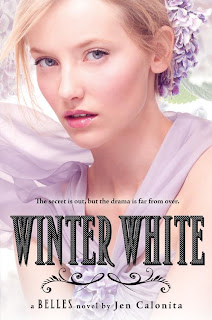 This is the second book in a series. If you have not read Belles yet and wish to avoid spoilers, I would like to suggest that you stop reading now.

Mira and Izzie are avoiding their father like the plague and that's easier said than done when PR requires them to act like they all get along. But Mira's thoughts are on Cotillion while Izzie is still trying to get settled into life in Emerald Cove. On top of that, someone really seems to be out to ruin their father's campaign and Savannah? Well, she's still horrible as always.

I'm pretty sure that I've said this before, but if you like Gossip Girl (with a dash of politics) then you might want to consider picking up this series--but if you've read Belles, then you already know that. What can you expect from Winter White? More drama, tons of familiar faces, and two new characters. Romance is definitely not the driving force for Winter White and I'd even go so far as to say that it takes a back seat when it comes to the plot--don't get me wrong, it's still there, it's just not in your face romance.

As for character development, I'll tell you that I felt like there could've been more of it for Mira and Izzie, but that they still did some growing. It really did feel like the plot took center stage in that respect. On the other hand, I'd say that Brayden has definitely done some growing and although it's not something that you'll see right away, it happens when it counts the most. There's actually another character that does some growing--who I won't mention here--and while I do appreciate it, I think that the character in question still has some growing to do before I can start to see them in a more positive light.

In all, if you've read Belles and have been thinking about reading Winter White, definitely give it a go. I did like it and I'll be looking forward to The Grass Is Always Greener come April 2013, but at the same time, I would've liked to have seen more character growth.