In the After by Demitria Lunetta 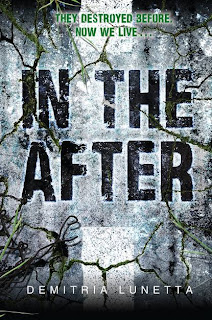 Amy is watching TV when it happens, when the world is attacked by Them. These vile creatures are rapidly devouring mankind. Most of the population is overtaken, but Amy manages to survive—and even rescue “Baby,” a toddler she finds in an abandoned supermarket. Marooned in Amy’s house, the girls do everything they can to survive—and avoid Them at all costs.

After years of hiding, they are miraculously rescued and taken to New Hope, a colony of survivors living in a former government research compound. While at first the colony seems like a dream with plenty of food, safety, and shelter, New Hope slowly reveals that it is far from ideal. And Amy soon realizes that unless things change, she’ll lose Baby—and much more.

Rebellious, courageous, and tender, this unforgettable duo will have you on the edge of your seat as you tear through the pulse-pounding narrow escapes and horrifying twists of fate in this thrilling debut from author Demitria Lunetta.

Why am I waiting on In the After? What originally drew me to In the After was definitely the cover. However, on HarperCollins's catalog page for In the After, they say that it's perfect for fans of Across the Universe. And that definitely piqued my interest--on top of the plot, obviously. I definitely have high hopes for In the After--can we fast forward to June?

In the After by Demitria Lunetta is published by HarperTeen, an imprint of HarperCollins, and its expected publication date is June 25, 2013.

So, what are you waiting on this week?
.
Posted by Kristin @ Beneath Shining Stars at 9:34 PM