Through To You by Emily Hainsworth 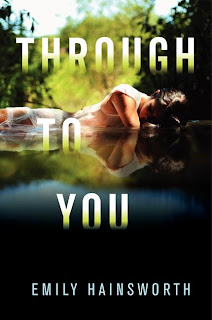 It's been two months since Cam's girlfriend, Viv, was killed in a car accident that he feels should've killed him. That night, when he goes to visit the site of her death, Cam sees a girl who seems to know him. Only, she's transparent and although she seems to know him, he doesn't know her. Cam soon discovers that she's from a parallel world, one where he died and Viv survived. He's thrilled by the thought that he can be with Viv again, only this Viv isn't like the Viv he remembers.

If you've been following my blog for a while now, you know that it's rather uncommon for me to pick up books written with a male first person perspective. Having said that, I really did like Through To You, a lot. My favorite character? Nina, the girl who he thinks must be a ghost (or hired to screw with his mind). I'm not going to tell you more than that about her because you'll definitely get to know her in Through To You. She has a younger brother named Owen who seems like he's pretty darn adorable and he really looked up to Cam.

On the other hand, the Viv from Nina's world? She's frightening. Maybe not initially, but you'll definitely see what I mean as things progress. However, she definitely plays a large role in everything and I seriously cannot tell you more than that. Cam definitely does a fair bit of growing throughout Through To You and although I won't tell you exactly how it ends, I'll tell you that I thought it was beyond fitting. I honestly could not picture it ending any other way.

If you're still wondering if I'd recommend this to you or not, the answer is yes, I definitely would. It's the tale of Cam's grief over Viv's death and ultimately, how Cam deals with it.


Through To You by Emily Hainsworth
Publisher: Balzer + Bray, an imprint of HarperCollins
Release Date: October 2, 2012
Edition: e-ARC
Received for review via publisher and Edelweiss.
Posted by Kristin @ Beneath Shining Stars at 2:00 PM