Stacking The Shelves is a weekly book haul meme hosted by Tynga of Tynga's Reviews. 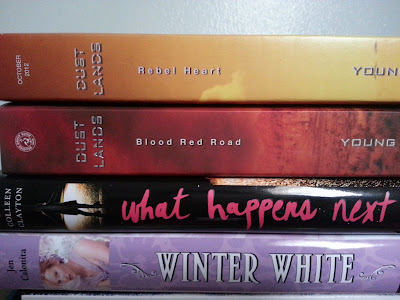 I think my new phone's camera is infinitely better than the one my last phone sported! (Also, yes, that's what I've gotten in my mailbox over the past two weeks.)

Rebel Heart by Moira Young (Won)
More action, more action, and the same accented character voice that you got to know during Blood Red Road.

Blood Red Road by Moira Young (Won)
This came along with the ARC of Rebel Heart which means that I now have hardcover and paperback copies of Blood Red Road!

What Happens Next by Colleen Clayton (For Review)
A contemporary that focuses on a young girl who has some body issues, deals with a rape, and a boy known as the the school's resident druggie. Yes, I've finished reading it--I just need to write up my review!

Winter White by Jen Calonita (For Review)
I've already posted my review for this one, but it's a little like Gossip Girl with a side of state politics.
.
Posted by Kristin @ Beneath Shining Stars at 3:24 PM

Email ThisBlogThis!Share to TwitterShare to FacebookShare to Pinterest
Labels: Stacking the Shelves