The Nightmare Affair by Mindee Arnett 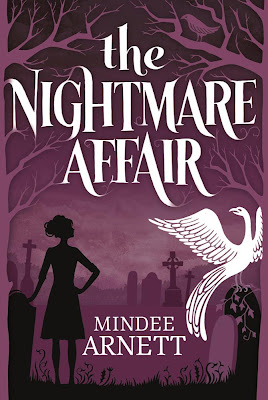 Summary via Goodreads:
16-year-old Dusty Everhart breaks into houses late at night, but not because she’s a criminal. No, she’s a Nightmare. Literally. Dusty is a magical being who feeds on human dreams.

Being the only Nightmare at Arkwell Academy, a boarding school for magickind, and living in the shadow of her mother’s infamy is hard enough. But when Dusty sneaks into Eli Booker’s house, things get a whole lot more complicated. He’s hot, which means sitting on his chest and invading his dreams couldn’t get much more embarrassing. But it does. Eli is dreaming of a murder. The setting is Arkwell.

And then it comes true.

Now the Dusty has to follow the clues—both within Eli’s dreams and out of them—to stop the killer before more people turn up dead. And before the killer learns what she’s up to and marks her as the next target.

-----
Why am I looking forward to The Nightmare Affair? It has a gorgeous cover, the setting is a boarding school, supernatural stuff is involved (yes, I know, I'm terribly eloquent tonight), and there's a murderer. In short, it sounds like it's going to be an exciting read--one that I can't wait to get my hands on!

The Nightmare Affair by Mindee Arnett is published by Tor Teen and its expected publication date is March 5, 2013.

What are you waiting on this week?
.
Posted by Kristin @ Beneath Shining Stars at 8:15 PM