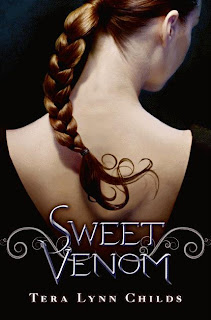 Gretchen has been fighting monsters for years and until now, she believed she was the only huntress. You can imagine her surprise when she stumbles across a girl who looks just like her at an all ages club in San Fransisco. She's no longer the only descendant of Medusa and they share a destiny, one that will force them to work together.

So, that was me trying to be vague and not give too much away; but to be honest, I'm sure you'll catch on to everything pretty quickly if you decide to read Sweet Venom. I tore through it pretty quickly and while I enjoyed it, I feel like it could've been better. Don't get me wrong, I love how each of the girls is different from one another, but I think it was too focused on their initial relationship and it felt--to me--like the plot played more of a minor role in Sweet Venom. I also, personally, would've preferred to see more of the minor characters and specifically Clare's brother, Thane.

The flow, on the other hand, was good. It kept me reading and while I wasn't too much of a fan of the multiple points of view (three), it was something I could deal with. However, because there were three points of view, I felt like Sweet Venom would've had to have been a bit longer for me to get a better feel for the characters. (And again, I'd have loved to have seen more of the minor characters. It really felt like for the most part, it was the girls versus the monsters.) The mythology behind Sweet Venom was well thought out--I thought--and I liked the wide variety of monsters that they ended up encountering. As you might've guessed, the mythology in Sweet Venom is Greek.

If you've been thinking about reading Sweet Venom, I encourage you to form your own opinions on it. Did I mention that the Kindle (and Nook) editions are free until October 1st?


Sweet Venom by Tera Lynn Childs
Publisher: Katherine Tegen Books, an imprint of HarperCollins
Release Date: September 6, 2011
Edition: Kindle copy
* Purchased on my own.
Posted by Kristin @ Beneath Shining Stars at 4:51 AM