Stacking The Shelves is a weekly meme hosted by Tynga of Tynga's Reviews and here's a post summarizing what it's about. (Or if you'd prefer, I'll just summarize and say that it allows everyone to show what they've gotten in the past week in terms of books--whether they're physical copies, e-books, books borrowed, etc.) 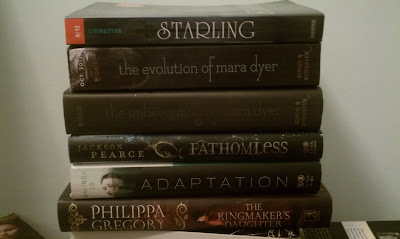 Starling by Lesley Livingston (Won from Epic Reads)
Haven't had a chance to read it yet, but I've heard good things about it and can't wait to dive in! (And I've actually had it for about a week now--I really need to find time to read it!)

Fathomless by Jackson Pearce (Received for review from publisher.)
Probably my favorite out of the retellings thus far! I need to write up my review still, but I really did enjoy it.

Adaptation by Malinda Lo (Received for review from publisher.)
If you've been thinking about picking up Adaptation when it comes out, I can tell you right now that it's probably a very good idea. Yes, I really, really enjoyed Adaptation and just- I'd recommend it to you. Really, I would. I mean, unless you don't like science fiction--but Adaptation's level of science fiction is really easy to understand. Yes, I also need to write up my review for Adaptation--and I hope to post that sucker soon.

The Kingmaker's Daughter by Philippa Gregory (Received for review via publisher--unsolicited.)
Yes, that is a UK copy. It appeared out of the blue from Simon & Schuster UK and not only is the hardcover gorgeous, but I've been hankering for some historical fiction!
.
Posted by Kristin @ Beneath Shining Stars at 5:13 AM

Email ThisBlogThis!Share to TwitterShare to FacebookShare to Pinterest
Labels: Stacking the Shelves