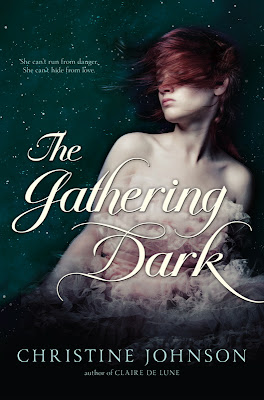 The Gathering Dark by Christine Johnson

Summary via Goodreads:
A mysterious teen boy knows the secrets of Keira’s dangerous hallucinations in this gripping romantic fantasy from the author of Claire de Lune.

Keira’s hallucinating. First it’s a door hovering above the road; then it’s a tree in her living room. But with her parents fighting and her best friend not speaking to her, Keira can’t tell anyone about her breakdown.

Until she meets Walker. They have an electric connection, and somehow he can see the same shadowy images plaguing Keira.

But trusting Walker may be more dangerous than Keira could have ever imagined. The more she confides in him, the more intense—and frightening—her visions become. Because Walker is not what he appears to be. And neither are her visions.

Why am I waiting on The Gathering Dark? Er, confession time! The cover is a big part of what originally drew me to The Gathering Dark. Having said that, the synopsis definitely makes it sound like it's going to be an interesting read! And I know, I know, you might have read "electric connection" and be thinking that maybe it's insta-love. Hopefully that's not the case or if it is, it's done well. Regardless, I know that I'll be keeping my eyes out for it in February!

The Gathering Dark by Christine Johnson is published by Simon Pulse, an imprint of Simon & Schuster, and its expected publication date is February 12, 2013.

So, what are you waiting on this week?
.
Posted by Kristin @ Beneath Shining Stars at 8:22 PM