The Boy Recession by Flynn Meaney 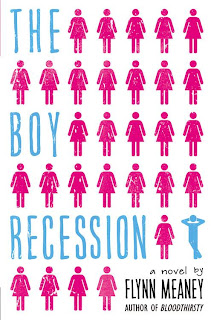 When your school's cute boy population dwindles, what do you have? Well, according to Eugene, you have a boy recession. Suddenly the boys who usually go overlooked are getting a ton of attention and Kelly comes to the realization that she likes Hunter, just as he skyrockets in popularity.

Told in first person and alternating between Hunter and Kelly, The Boy Recession certainly lives up to its name. It's not precisely what I thought it would be, but I definitely ended up liking it! And I'm just going to toss this out there, but Eugene is a mastermind and the Pride and Prejudice bit was adorable and hilarious. Honestly, I think as far as minor characters go, he was definitely my favorite and the most memorable out of the bunch. I think I personally would've liked more of the Derek and Darcy dynamic and maybe a bit more of Aviva too. (Darcy being Kelly's friend who is out to change the world and does a ton of reading while Aviva on the other hand is a bit boy crazy.)

Hunter was pretty darn adorable--and not the most motivated guy in the world, but he manages. I think my favorite part about him was how he taught the elementary kids how to play the drums--you'll see what I mean. Kelly on the other hand, well, she acts as a balance between her friends and it's through band that she knows Hunter--they've actually known one another for a while.

As for the plot itself, I definitely enjoyed it! I will, however, admit that--at least to me--it felt like the romance could've meshed with the plot a little bit better (if that makes sense). I really feel like the highlight was prom and I refuse to spoil it for you, but there are several reasons behind why I loved the prom scene so much. This is--what I'd consider to be--a light read and if you're looking for a straightforward contemporary romance to read before the summer is over, you might want to consider checking The Boy Recession out. (Also, Hunter's inspiration behind the song that he wrote made me laugh--it fit him all too well.)


The Boy Recession by Flynn Meaney
Publisher: Poppy, a part of Little, Brown Books for Young Readers
Release Date: August 7, 2012
Edition: Hardcover
* Received for review via publisher.
Posted by Kristin @ Beneath Shining Stars at 6:04 AM