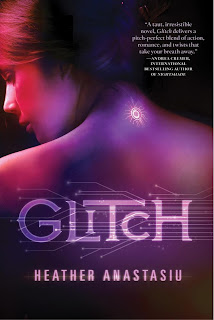 When Zoe starts to glitch, she knows that she's supposed to report her behavior, but she refrains from doing so. Suddenly there's emotions and color in her world and quite frankly, it's overwhelming when compared to the Link--which keeps everyone in line. And then there's the fact that her glitching has also lead to a particular power that she has very little control over. She knows that all of this is grounds for deactivation and well, no one wants to be deactivated--nor does she want to go back to being one of the drones (so to speak). It's around that time that she meets Adrien, who also has an usual skill, he can see into the future and he's seen her--well, I won't spoil it for you (but no, not naked). That's when everything really starts and Zoe's life will never be normal again.

While I liked Glitch, I feel like if there had been more action and less focus on Zoe and the boys, it would've made for a better read. Don't get me wrong, I like romance in the books that I read a lot; but at the same time, when it feels like it's the focus of the book--that isn't strictly a romance book--it leaves me wanting more plot. I liked how Adrien was introduced well enough and I didn't mind Max that much, but I wish that the romance had had more build up than it did. Adrien seems like a nice enough guy and he does seem to want what's best for Zoe while Max just seems to want Zoe for her body. At least, that's how it felt to me. To be honest, neither of the boys really swept me away and while I still have hope for Adrien, I really have none for Max.

As for Zoe, I can understand why she's constantly warring with herself--about turning herself in--and she's pretty darn terrible at hiding her heartbeat--they wear monitors that beep--but she felt... weak? At least during the first half, that's really how she felt to me but the good news is that she definitely grows and by the time I reached the end of Glitch, well, I'm looking forward to seeing how she continues to grow in the next book.

Then you have the chips that the Community has implanted in everyone and they keep you from feeling anything... but pain--which was deemed necessary. They're definitely an interesting aspect of Glitch and I can't wait to learn more about them--and why they cause certain people to glitch. That's right, the chips are a part of the reason why people have started to glitch and no, not everyone glitches. There's actually so much more about the Community that I could say but that'd mean some pretty serious spoilers, so you'll just have to read Glitch to find those out.

In all, a pretty good read but one that I can't say I was absolutely in love with. The concept is definitely interesting and overall, I definitely liked it despite a few minor annoyances. If you've been thinking about reading Glitch then I'd definitely recommend that you read it to form your own opinions as it's definitely a book that I feel some people will enjoy more than I did.