So Close to You Blog Tour (An Interview with Rachel Carter)

Today I'm the blog tour stop for So Close to You and I'm absolutely thrilled to have Rachel Carter on the blog! If you're debating over picking up So Close to You, I have two words for you: time travel. 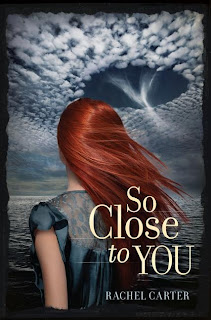 Lydia Bentley has heard stories about the Montauk Project all her life: stories about the strange things that took place at the abandoned military base near her home and the people who've disappeared over the years. Stories about people like her own great-grandfather.

When Lydia stumbles into a portal that transports her to a dangerous and strange new reality, she discovers that all the stories she's ever heard about the Montauk Project are true, and that she's in the middle of one of the most dangerous experiments in history.

Alongside a darkly mysterious boy she is wary to trust, Lydia begins to unravel the secrets surrounding the Project. But the truths behind these secrets force her to question all her choices--and if Lydia chooses wrong, she might not save her family but destroy them . . . and herself.

What inspired you to write So Close to You?
I was inspired by a lot of things! I’ve always loved time travel books, so as soon as I heard about the real life conspiracy of the Montauk Project, I knew I wanted to write a story about it.

What was your favorite scene to write?

There’s a scene where Mary and Lydia go into a general store in the 1940s, and Lydia is marveling at all of the products and advertisements on the walls. That was fun to write, because I loved imagining a modern teenager reacting to this foreign time period.

Is there a song that you think summarizes So Close to You?
It’s tough to pick just one! But probably The World Spins Madly On, by The Weepies.

What are you working on now?
I just finished writing and editing the sequel to So Close to You, and now I’m starting to outline book 3. I also have about a million other story ideas that are rolling around in my head.

What are some of your guilty pleasures?
Yikes - I have so many guilty pleasures it’s embarrassing. Reading romance novels in the bathtub. Eating sunflower seeds with the shells on them. Anything on the CW. Right now my biggest one is probably The Bachelorette. It was a slow start, but Emily has officially won me over. (Team Jef!)

What have you read and loved recently?
The Morning Gift, by Eva Ibbotson. I think it was the fourth time I’ve read it. I love that book. I love all Ibbotson’s books; they’re so fun and clever and romantic. I’m exceedingly envious of her prose!

Rachel Carter grew up in the woods of Vermont. She is a graduate of the University of Vermont and Columbia University, where she recently received her MFA in nonfiction writing. Rachel has been a teacher, a nanny, a caterer, and a bellhop. She is currently at work on her next book in Brooklyn, NY.