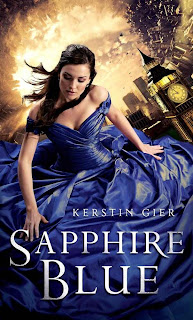 Summary via Goodreads:
Gwen’s life has been a rollercoaster since she discovered she was the Ruby, the final member of the secret time-traveling Circle of Twelve. In between searching through history for the other time-travelers and asking for a bit of their blood (gross!), she’s been trying to figure out what all the mysteries and prophecies surrounding the Circle really mean.

At least Gwen has plenty of help. Her best friend Lesley follows every lead diligently on the Internet. James the ghost teaches Gwen how to fit in at an eighteenth century party. And Xemerius, the gargoyle demon who has been following Gwen since he caught her kissing Gideon in a church, offers advice on everything. Oh, yes. And of course there is Gideon, the Diamond. One minute he’s very warm indeed; the next he’s freezing cold. Gwen’s not sure what’s going on there, but she’s pretty much destined to find out.
-----
Why am I looking forward to Sapphire Blue by Kerstin Gier? Because I loved Ruby Red! I will, however, admit that I liked the original US cover for Ruby Red over the new cover style that they're using for Sapphire Blue.
Sapphire Blue by Kerstin Gier is published by Henry Holt and Co. (BYR), a part of Macmillan, and its expected publication date is October 30, 2012.

What are you waiting on this week?
-

Posted by Kristin @ Beneath Shining Stars at 11:16 PM