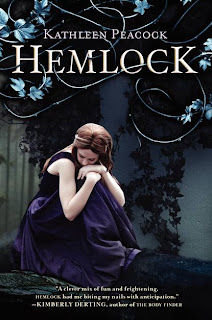 It's the death of Mac's best friend, Amy, that starts everything. It's why the Trackers come to Hemlock, invited by Senator Walsh (Amy's grandfather), to hunt the white werewolf that seems to have returned. Mac figures that if she can locate the wolf responsible for Amy's murder first, they'll have to leave but there's more to Amy's death than meets the eye. On top of that, the boys (Jason and Kyle) have their secrets too; ones that will definitely affect Mac.

Hemlock is the perfect blend of romance and action. Having said that, it's definitely not your stereotypical romance. That is to say, there's no new boy coming to town and I loved that about Hemlock. And although things might seem simple at first, they get much more complicated as things go on. I can't imagine not turning pages like a madwoman while reading Hemlock and from start to finish, it really didn't slow down. But the ending? Oh. My. Goodness. I really, really want to see what happens in the second book because things are far from done. You'll understand what I mean when you reach the end, that much I can promise you.

The other thing that I really loved about Hemlock is that the minor characters play a part throughout the entire book. Amy--for example--might be dead, but she's haunting Mac's dreams still and her part is far from over. Tess, Mac's cousin, is her legal guardian and although she's forgetful at times, it seems like she's quite cool! Then there's Ben, Tess's boyfriend who often looks after Mac when Tess is at work. As for Jason and Kyle, it's hard to say who I like more! There are moments when I really like both of them and other moments when I feel like they both really need to get slapped. And their secrets? Well, you'll have to read to figure those out. (But Kyle's ex-girlfriend Heather is a psychotic b-word. That definitely needs to be said.)

I will say this much though, Jason's taken an interest in joining the Trackers and Mac--having seen what the Trackers are capable of--definitely does not approve. The Trackers? Well, they're scum. They go around hunting people who have LS (lupine syndrome) and they're also known to seriously bully normal people too. Their leader is a man named Branson Derby and he's insane. He sees people as tools and well, the lengths that he'll go to in order to accomplish his goals are crazy.

As for Mac, she's holding herself together as best she can--considering the fact that her best friend is dead and her best friend's boyfriend is a complete mess because of it (a mess that Mac frequently picks up). Then there's the fact that she's had a crush on Kyle for quite some time and Heather, Kyle's ex-girlfriend, is pretty darn needy which means that Kyle spends a ton of time with her. She's pretty strong willed though and ultimately I definitely liked her.

For the record, werewolves are out of the bag in Hemlock and those with LS are pretty much without rights. They're sent to rehabilitation camps to learn how to control themselves and I don't think they leave all that often. That, is why those with LS tend to try and hide the symptoms. How do you get infected? By being bitten or scratched. It was extremely interesting to learn about the werewolves in the world that Kathleen Peacock has created and I'm definitely looking forward to seeing more of them in the future.

In all, I love the world that Kathleen Peacock has created and I can't wait until the second book comes out. Everything is extremely well balanced and it was another one sitting read for me. Wait until you learn more about Amy's murder! This is definitely a book that I'd recommend to you if you enjoy urban fantasy, mystery, and romance. (Can I have the next book already?)

Favorite Quotes:
Kyle shrugged and walked over to the small, two-seater breakfast table. "Scratching a CD is an accident. Dragging your best friend into a brawl against three varsity football players is practically manslaughter."

For some reason, 90 percent of Tess's fears seemed to come from movies we watched on cable.


Hemlock by Kathleen Peacock
Publisher: Katherine Tegen Books, an imprint of HarperCollins.
Release Date: May 8, 2012
Edition: ARC
* Received for review via publisher.
Posted by Kristin @ Beneath Shining Stars at 2:01 PM