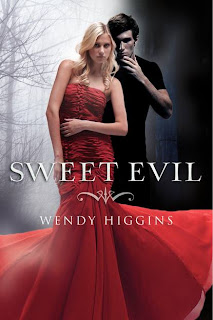 Warning: You may need a fainting couch and a bathtub full of ice for this one.

I don't even know where to begin but let me tell you this: I fell in love with Kaidan Rowe. Why? Because he's an extremely hot guy who happens to be the drummer for a band called Lascivious and he has a British accent. Oh, and his father happens to be the Duke of Lust. Yes, he's a bad boy; but at the same time, when Anna is around him... he's better behaved. The romance is definitely a big part of Sweet Evil and it's what I consider well written romances to be. What do I mean by that? It makes my heart beat a little faster and maybe even skip a beat every now and then. I swear I'm not an overly emotional reader but every now and then, I find a book that really gets to me. Sweet Evil is one of those books. But again, if you don't like books with a heavy helping of romance, this might not be for you--although if you're on the fence, I'd definitely recommend that you read it for the sake of forming your own opinion.

Asides from the red hot romance, you'll learn about the Nephilim, their parentage, and the role that they're expected to play. It was, in my opinion, very fascinating and I should warn you that there is some mention of drugs and alcohol in Sweet Evil. Because of this, I'd say that this is probably a book for older teens. And then there are the minor characters like Kopano (one of Kaidan's Nephilim friends) who happens to be wonderfully complex. To be honest, I'm really glad that Jay, Anna's best friend, isn't also going after Anna--which means that yes, there does not appear to be a love triangle which is definitely a welcome change. Oh, and Scott is a sleazeball who should probably go rot in a hole somewhere. Anna's adoptive mother, Patti? She's wonderfully supportive of Anna and at heart, wants what is best for Anna--although she can be a tad overprotective.

Anna isn't exactly your typical teenaged girl though. After all, she's Nephilim too--although her heritage is unusual when compared to the other Nephilim (she's half Angel and half Demon). In all, she spends a ton of time keeping herself from giving into her darker side and I love that about her! She also does her best to keep Jay from going down the wrong path as well--although up until recently she didn't know what she is. Because of this, you could say that Sweet Evil is about Anna finding the balance between her two sides and learning about who she really is.

Sweet Evil will take you from Cartersville, Georgia to California and back again. You'll learn about the Nephilim, Anna's unique abilities, and the steamy romance? It's pretty darn steamy. If Kaidan Rowe sounds like your sort of guy, definitely pick up a copy of Sweet Evil. I promise you that he's not that bad of a guy.


Sweet Evil by Wendy Higgins
Publisher: HarperTeen, an imprint of HarperCollins.
Release Date: May 1, 2012
Edition: ARC
* Received for review via publisher.
Posted by Kristin @ Beneath Shining Stars at 1:09 PM