The Immortal Rules by Julie Kagawa 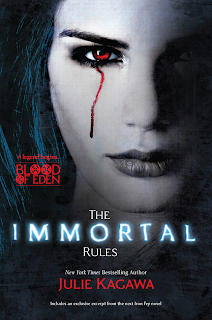 Allie lives in a sector of a vampire city as an Unregistered, someone who can starve if they don't steal food from those that are Registered. But when the hunt for food pushes her to go beyond the safety of the walls, everything changes. She'll lose friends, have a run in with a vampire (and rabids), and ultimately have to choose between becoming the thing that she hates most or leaving the world... permanently. But Allie isn't ready to leave the world behind and as a vampire, she'll have to leave the safety of the vampire city behind in order to survive.

The Immortal Rules is a pretty lengthy read; however, it's also a gripping read and every time you pick it back up, you'll likely find yourself completely immersed in the world that Julie Kagawa has created. I loved Allie as a character. She'll do what it takes to survive and she has no illusions about what being a vampire means--Kanin saw to that. But perhaps more importantly, she seems determined to hold onto what is left of her humanity. Wondering who Kanin is? He's the vampire who turned Allie and he has some serious secrets. I absolutely loved his character and I'm hoping that we'll see a lot more of him in the next book (I imagine this will be the case). And then there's Zeke, the human that Allie meets after she leaves the city. He's a very nice boy and well, Allie certainly likes him which is obviously rather dangerous.

And for the record, there were two characters that I rather disliked. Stick, due to his extremely wimpy and well, you'll see why I don't like him (although it's possible that you won't dislike him for it as much as I do); and Jeb, who is definitely set in his ways. But asides from that, I really enjoyed The Immortal Rules as it's definitely unique (due to the vampire cities being where most humans live). Oh! And how could I forget about the rabids? But you'll learn all that you need to (about them) in The Immortal Rules. Let's just say that their history is quite interesting--and they're rather like zombies, only not actually zombies (although you could probably consider them to be close cousins).

If you're looking for action, adventure, a different sort of dystopian society, and some romance, I'd recommend The Immortal Rules to you. Also if you like the fact that the main character is Asian and wields a katana--which I personally do.


The Immortal Rules by Julie Kagawa
Publisher: Harlequin Teen, a part of Harlequin.
Release Date: April 24, 2012
Edition: e-ARC
* Received for review via publisher and NetGalley.
Posted by Kristin @ Beneath Shining Stars at 1:02 PM