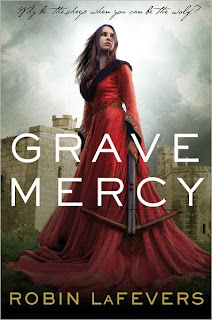 What's Grave Mercy about? It's about Ismae Rienne, handmaiden (and daughter) of Death, who is sent (by her convent) to be their eyes and ears at court while playing Gavriel Duval's mistress. There's plots to steal Anne of Brittany's duchy out from under her, murders, a bit of romance, and well, quite a bit of action--although I should point out that it is not all action all the time (but it definitely has its moments).

Asides from Ismae, I really loved Anne. I know, not what you were thinking; but she's thirteen and rules the duchy. I mean, thirteen. I know that, during the time period it's not that young, but to me it's still pretty impressive. And let's not get me started on Duval because he's pretty hard to hate. Seriously, he rivals Ismae in terms of abilities and because of it, they're a really good match! There's also Sir Benabic of Waroch (known as Beast) and De Lornay--who are polar opposites and friends of Duval's. Honestly, there were very few characters who I didn't like--and those who I didn't like, well, I don't believe I was supposed to like them in the first place.

I love how the saints are incorporated into the story and in particular, Death--who is obviously very, very important to the story. Also, I have a feeling that for the most part, Grave Mercy is Ismae's story in its entirety--although we might see her again in the next book. To be honest, I was hoping that we'd see more of her story but I'm looking forward to seeing how Dark Triumph develops the story (as I believe it's Sybella's turn). Grave Mercy definitely flows nicely and if it sounds like you might like Grave Mercy, definitely give it a try.

Favorite Quote:
"I know that what our saints want is not always made clear to us. Sometimes, it is their wish for us to flail and struggle and come to our own choices, not accept ones that have been made for us."