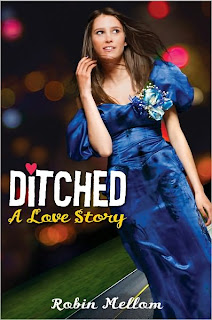 It's been eight months and thirteen days since Justina has kissed a boy and she fully intended to find out what sort of kisser Ian Clark is, until she finds herself ditched in a ditch the day after prom. Things, did not go according to plan.

Ditched begins the morning after prom as Justina finds herself in a ditch on Hollister Road and wanders into the nearby 7-Eleven. That, is where she'll ultimately reveal the details of the previous night to Gilda, the woman working at the 7-Eleven. Let's just say that Justina's dress has been through hell and each stain and rip tells of events throughout the night--also, I couldn't help but wince a bit when I thought about completely matching like that. Maybe that's just my personal nightmare, but I'm happy I wasn't coerced into a single shade like that for my prom.

Ditched by her date and very close friend, Ian, Justina can't help but feel terrible and it definitely shows. However, let's be honest here, he sounds like a great guy and whenever Justina would assume that he'd left her to be an ass... well, let's just say that I'd like to shake some sense into her. Justina is pretty hard headed throughout most of Ditched and I think this definitely affected my reading experience because she really doesn't want to believe that someone like Allyson Moore could want to help her or well, just be nice. That's not to say that Justina isn't nice, only that she doesn't seem to understand when (or why) certain people are trying to help her. After all, she befriends Serenity and Bliss--the girls that Mike and Mike bring to their prom. Oh! Did I mention that there's a three-legged Chihuahua named Chompers McGee? That's probably the cutest name for a tiny dog that likes to be toothy!

If I'm honest, I wish that Ditched would've included the minor characters a bit more and that maybe we would've seen a bit past prom (although I can understand why it ended where it did). It wasn't that I didn't like the ending, but I just feel like it would've felt more complete--at least to me--if it had continued until graduation or something. Having said that, if you're up for a wild ride and ready to shake your head at some of Justina's antics, I'd recommend Ditched to you.


Ditched by Robin Mellom
Publisher: Hyperion (Children's), a part of Disney-Hyperion.
Release Date: January 10, 2012
Edition: e-ARC
* Received for review via publisher and NetGalley.
Posted by Kristin @ Beneath Shining Stars at 3:53 AM