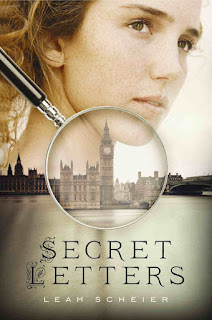 Summary via Goodreads:
Inquisitive and observant, Dora dreams of escaping her aristocratic country life to solve mysteries alongside Sherlock Holmes. So when she learns that the legendary detective might be her biological father, Dora jumps on the opportunity to travel to London and enlist his help in solving the mystery of her cousin’s ransomed love letters. But Dora arrives in London to devastating news: Sherlock Holmes is dead. Her dreams dashed, Dora is left to rely on her wits—and the assistance of an attractive yet enigmatic young detective—to save her cousin’s reputation and maybe even rescue a kidnapped heiress along the way.

Steeped in Victorian atmosphere and intrigue, this gripping novel heralds the arrival of a fresh new voice in young adult literature.

Why am I waiting on Secret Letters? Because I love the idea behind it--being a sucker for both mysteries and the Victorian era! On top of that, I love that Dora might be the biological daughter of Sherlock Holmes!

Secret Letters by Leah Scheier is published by Hyperion Book CH and is set for release on June 26, 2012.


So, what are you waiting on this week?
Posted by Kristin @ Beneath Shining Stars at 4:25 AM