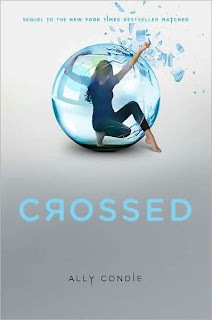 If you haven't read Matched yet and dislike spoilers, I would suggest that you stop reading now. As much as I dislike giving spoilers, this is the second book in a series and as such, there will--unavoidably--be spoilers for the first book.

Alternating between Cassia and Ky's point of view, Crossed takes you to the Outer Providence and the war that's being fought on the border, where Ky has been placed. Cassia has her heart set on finding Ky again, and she'll do whatever it takes to get back to him. Meanwhile, Ky is nothing more than a decoy, meant to die while in the Outer Providences; but dying isn't in his plans, as long as Cassia is still out there.

I know I'm not letting on about the adventure that the two of them go on in the Outer Providences, but there's a good reason for that and quite frankly, I think it's best that you read about it on your own. With that said though, I will force myself to admit that I did not enjoy Crossed as much as I enjoyed Matched. Why? Because there was a lack of Xander in Crossed and I personally felt that the romance has taken a backseat. It's not that Xander's presence isn't felt, but the romantic tension from Matched seems to have dissipated.

I will admit that I like Indie, a new character brought about in Crossed. She's crafty and smart, but at the same time I have a feeling that she's going to be Cassia's competition. If I didn't like Xander so much, I doubt I'd feel like this is much of a problem--but I really, really like him! There's also Eli, who reminds Ky of Cassia's younger brother and Hunter, a man living in the the Carving.

In Crossed, you'll learn about those who live outside of the Society, the canyon known as the Carving, and a group called the Rising who intend to bring about the end of Society. If you enjoyed Matched, you should probably enjoy Crossed as well--for although I didn't like it quite as much, I will admit that I liked it well enough (I only hope that there will be more romance in the next book).