Awake at Dawn by C.C. Hunter 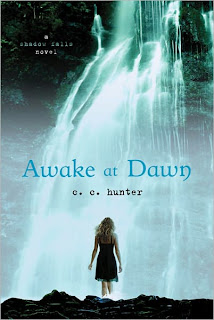 Summer is coming to an end and Kylie Galen still doesn't know what she is. If that wasn't bad enough, there's a ghost who continues to tell her (very vaguely) that someone she loves will die if Kylie doesn't act and her powers continue to grow. Then there's Derek, who Kylie definitely likes, but he has a feeling that Kylie still has feelings for Lucas too. To put it simply, things have gotten much more complicated for Kylie and she doesn't have the answers to the questions that plague her.

It needs to be said that I found Kylie to be whiny throughout most of Awake at Dawn; don't get me wrong, I can understand why she'd be emotional, but it was starting to get on my nerves. Awake at Dawn does touch on the question that plagues Kylie (ie. What is she?) but it's still not completely explained. If anything, it's left me a little confused.

If you like Derek, you're in luck, there's a lot of him in Awake at Dawn. On the other hand, there's not a ton of Lucas. Yes, he does show up before the book ends, but I wish there had been more of him! Also, I wish that the wolf would've played a larger role in Awake at Dawn--you'll understand what I mean if you read it.

I love that Kylie finally went to investigate the falls though and I really hope that the cave will play a role in Taken at Dusk. Overall, I can't say that I was in love with Awake at Dawn although I did enjoy it well enough. If anything, I'm glad that Taken at Dusk will pick up right where Awake at Dawn left off at and I can't wait to find out more about Kylie's father!