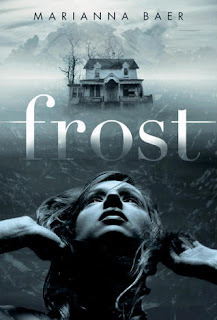 Leena knew that she wanted to spend the duration of her senior year living in Frost House with her three best friends the very first time she laid her eyes upon it. However, things don't go quite as planned when Celeste--a known eccentric--is moved into Frost House for the first semester due to a leg injury. Let's just say that Leena isn't the only one that doesn't want Celeste in the house. When strange things begin to happen within their room and more specifically, to Celeste, Leena will try to find an explanation to everything. Is Celeste doing these things to herself? Or is there something more sinister at work? Either way you look at it, there's much more to Frost House than first meets the eye.

There are two types of creepy; one is purposely bold and the other one? The one other is purposely subtle and Frost is definitely subtle. It sneaks up on you and the ending? That's when the paranormal element really comes into its own. With that said, I must confess that I didn't quite enjoy it as much as I thought I would because the paranormal elements were just that subtle to me. To be honest, I think it's because I expected Frost to be more frightening than I found it to be.

With that said, I really did love the cast of characters. There's David, Celeste's older--and very overprotective--brother, who Leena finds herself oddly attracted to--despite her self-inflicted relationship ban. Celeste, Leena's highly temperamental roommate, who hasn't been able to get a decent night's rest since she moved in. Viv, one of Leena's friends who is very much in love with her boyfriend Cam. Abby, another one of Leena's friends, who is immensely jealous of how much time Leena has been spending with Celeste. And lastly, Leena, who takes pills when she's anxious or overly stressed.

The other thing that I really loved about Frost was how it progressively got darker. I love it when books start off relatively bright and cheery and then the main character's life spirals out of control. I should probably also come clean and admit that I really didn't care for Celeste... for most of the book. There were moments where I liked her a bit, but she was just so... changeable that I couldn't bring myself to do much more than tolerate her.

Overall, if you like the sound of the summary, then yes, I'd recommend that you read Frost. Sure, I might not have liked it as much as I thought I would, but I can see a lot of other readers enjoying it. If you've read Frost, feel free to leave your thoughts below--I'd love to hear them! :)