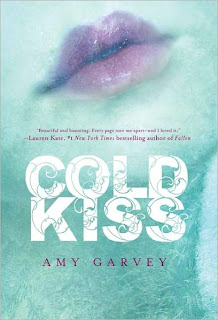 When Danny dies, Wren is heartbroken. She can't imagine living without him and in her grief she does something both frightening and amazing, she brings him back from the dead. Unfortunately he's not quite the Danny that she remembers; to put it simply, he's merely a shade of who he once was. And if dealing with her dead boyfriend wasn't enough, Gabriel, the new boy at school, knows what she can do. On top of this, Wren finds herself attracted to Gabriel and this is problematic, given the whole "dead boyfriend is not quite as dead as he once was" thing--it's the veritable elephant in the room. She'll have to find a way to control her powers, reconnect with her friends, and hopefully put Danny to rest.

Everyone grieves in their own way, but when you're able to do some extraordinary things (like Wren can), maybe you don't have to. At least, that's what I like to imagine Wren had thought when she decided to bring Danny back. I suppose Wren's biggest problem is her impulsiveness; it seems like she's constantly doing things without really thinking about what their long term effects might be. Luckily, she has Gabriel who does that sort of thinking for her. After all, storing your undead boyfriend above a neighbor's garage? Probably not the best idea. I mean, neither is bringing him back from the dead, but I think Wren gets that now.

I loved Amy Garvey's take on zombies. They're not mindless, they don't crave human flesh/organs, and for the most part, they have to listen to what their summoner tells them to do. They're (mostly) who they were before they died, just more compliant. And while I loved how sweet Wren and Danny's relationship was, Gabriel definitely grew on me--and he's probably the only person who she'd never really need to keep secrets from. I mean, not that she could considering the fact that he can technically read her mind (in the literal sense).

It really is heart-wrenching to read though (due in large part to Amy's wonderful writing style) since although Wren wanted him back, she's growing tired of how clingy Danny has grown. And with the way that Cold Kiss left off, it seems like there could be a second book considering the fact that Wren was never reunited with her father although I'd be perfectly happy with Cold Kiss as a standalone too. (Although there will be a second book.) So would I recommend Cold Kiss to you? Definitely. I mean, unless you don't like or care for zombies.