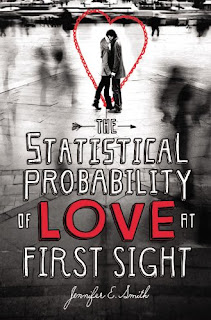 The Statistical Probability of Love at First Sight by Jennifer E. Smith

Summary from Goodreads:
Who would have guessed that four minutes could change everything?

Today should be one of the worst days of seventeen-year-old Hadley Sullivan's life. She's stuck at JFK, late to her father's second wedding, which is taking place in London and involves a soon to be step-mother that Hadley's never even met. Then she meets the perfect boy in the airport's cramped waiting area. His name is Oliver, he's British, and he's in seat 18B. Hadley's in 18A.

Twists of fate and quirks of timing play out in this thoughtful novel about family connections, second chances and first loves. Set over a 24-hour-period, Hadley and Oliver's story will make you believe that true love finds you when you're least expecting it.

Why am I looking forward to The Statistical Probability of Love at First Sight? Okay, okay, you caught me! Originally it was the cover that really caught my eye. I love the way that the red stands out in contrast to the black and white of the rest of the cover. But then I read the summary and knew that I had to read The Statistical Probability of Love at First Sight because who wouldn't love to have something like that happen to them!? Cute British guy? Yes, please! And I mean, sitting next to said British guy on the plane ride? Sign me up! But seriously, it sounds like it'll be a really adorable read!

The Statistical Probability of Love at First Sight by Jennifer E. Smith is published by Poppy (an imprint of Little, Brown Books for Young Readers) and its expected publication date is January 2, 2012.


Such a long wait, but hopefully it'll be worth it! So, what are you waiting on this week? :)
Posted by Kristin @ Beneath Shining Stars at 11:16 PM