Starcrossed
Author: Josephine Angelini
Publisher: HarperTeen (an imprint of HarperCollins)
Release Date: May 31, 2011
Edition: Hardcover
* Purchased on my own. 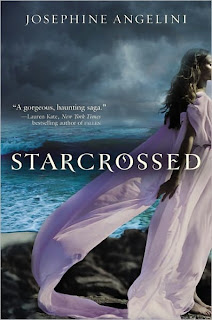 How do you defy destiny?
Helen Hamilton has spent her entire sixteen years trying to hide how different she is—no easy task on an island as small and sheltered as Nantucket. And it's getting harder. Nightmares of a desperate desert journey have Helen waking parched, only to find her sheets damaged by dirt and dust. At school she's haunted by hallucinations of three women weeping tears of blood . . . and when Helen first crosses paths with Lucas Delos, she has no way of knowing they're destined to play the leading roles in a tragedy the Fates insist on repeating throughout history.
As Helen unlocks the secrets of her ancestry, she realizes that some myths are more than just legend. But even demigod powers might not be enough to defy the forces that are both drawing her and Lucas together—and trying to tear them apart.

I had no idea what to expect when I started reading Starcrossed. Sure, I expected the mythology element, but it was so much more than that. For example, the first time that Helen meets Lucas is not what you're expecting. I love that it's set in Nantucket--a place that I'd love to visit someday--and then there's history that goes along with the mythology behind Starcrossed. Admittedly, I hated how much Helen did her best to blend in at first--mainly it was her non-confrontational attitude and the slouching that bothered me. However, once Lucas comes into the picture, Helen really grew on me.

I loved Helen's father, Jerry, who seemed like an awesome dad despite the fact that he's a single parent and Claire, Helen's best friend, who is absolutely hilarious. When it comes to Delos family members, I can easily say that Ariadne was my favorite (she seems really sweet) and I didn't care much for Cassandra. I mean, I can understand why Cassandra is so protective of her brother, but she's a tad overprotective. The pacing was excellent and I found that the only reason why I set Starcrossed down from time to time was because I didn't want the book to end.

This is definitely a book to pick up if you enjoy stories that incorporate Greek mythology and star-crossed lovers (hence the title). Helena isn't blasted with the knowledge of what she is or what she can do, it's discovered over time and with it comes the conflict for Starcrossed, Tantalus and the Hundred Cousins are after Atlantis and they believe Helena is the way to obtain it. I won't tell you any more than that though--I already feel a little guilty mentioning the Hundred Cousins and Tantalus--so you'll just have to read Starcrossed and see what I mean! ;) But seriously, if you've been thinking about reading Starcrossed and haven't read it yet, definitely give it a go. Personally, I really enjoyed it and I hope that you do too!