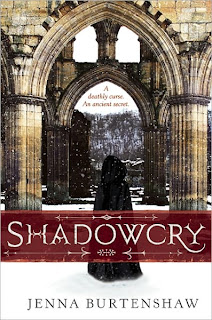 In the small town of Morvane, townspeople fear the wardens most of all. They swoop down upon towns in Albion and collect citizens with no warning; although the townspeople do not know it, they're collecting the Skilled, a group of people who can see past the veil that separates the world of the dead with that of the living. Not only can they see past the veil, but they can also bring the dead back to life or see (briefly) into the future. Kate Winters is one of the Skilled although she has no training and quite frankly, no idea what she is, she'll have to learn fast. Silas Dane lives a half-life, bound to Da'ru, one of the High Council members, he cannot die and has made it his mission in life to find a way to die. And that, is why he needs Kate; to break the bond that binds him to Da'ru and end his life.

Shadowcry was a book that I'd heard very little about prior to reading it. Sure, it'd be mentioned in a few In My Mailbox posts and I think I've now seen two reviews on it, but other than that, it appears to have slipped through the crack. All it took was the official summary to convince me to read Shadowcry and if you like fantasy stories with solid world building, I'd recommend this to you; however, be warned, there is no romance in Shadowcry--although I would have no objections to Kate and Silas being romantically involved. (Perhaps in a later book?)

Silas Dane is not your typical male character; he has no qualms with killing those who stand in his way and quite frankly, he's rather cold (both literally and figuratively). If Barrons hadn't been interested in Mac, it would've been similar to this, I think. Silas will keep Kate safe as long as she's useful to him. Then there's Edgar who I can't say that I like or dislike. He just wasn't involved in enough of Shadowcry for me to form a real opinion about him. Other characters include Artemis, Kate's uncle, who knew about all of this and had been doing his best to keep Kate safe and Da'ru, the High Councilwoman who is obsessed with finding Wintercraft, a book written by a group of Skilled that were able to do much more than what most of the normal Skilled are able to do. But it's not just the book that she's after, it's Kate too.

Shadowcry will take you from Kate's hometown of Morvane to the walled city of Fume which now houses the High Council as well as the rich and powerful although once upon a time it simply housed the dead. There's really not much more that I can tell you than that. Would I recommend Shadowcry to you? Yes! Maybe it's not as fast paced as it could be, but personally I really enjoyed the plot and admittedly it's not the largest book so I got through it with relative speed. Maybe it won't appeal to everyone, but personally I really enjoyed it.

Seriously though, I'm looking forward to the next book entitled Blackwatch (although the title might change by the time the book gets released, after all, there's no official release date for the next book from Greenwillow) and I'm hoping for a lot more Silas Dane. And if you couldn't tell by now, yes, I'm slightly obsessed with Silas Dane.