The White Devil by Justin Evans 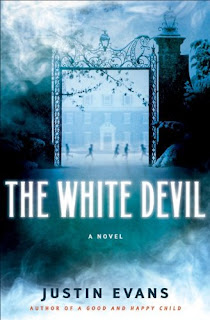 Summary from GoodReads:
Joe Hill’s Horns  meets Donna Tartt’s The Secret History in this bold new thriller from Justin Evans, author of the critically acclaimed A Good and Happy Child. When seventeen-year-old Andrew Taylor is transplanted from his American high school to a British boarding school—a high-profile academy for the sons of England’s finest—his father hopes that the boy’s dark past will not follow him from across the Atlantic. But blood, suspense, and intrigue quickly surround Andrew once again as he finds himself struggling with a deadly mystery left unsolved by a student from Harrow School’s past—the enigmatic poet Lord Byron.

If you're like me, the first thing that you think when you hear the title is, "Does this involve demons?" The answer to that question is, "Only personal ones." Or rather, that The White Devil is the name of a play by John Webster and it is relevant--and mentioned--in the book. Also, the one who references it is a sort of personal demon--of Lord Byron's named John Harness who happens to be haunting our main character Andrew Taylor (who looks rather a lot like Lord Byron).

Andrew Taylor is an American who has been sentenced to Harrow School by his father as his last chance to redeem himself and hopefully get into a good college. By "sentenced," I mean to say that his father had to buy his son's way in and quite frankly, Andrew is less than pleased to be there. Happily, this does change over time and suddenly the boy who was kicked out of his old school for drugs finds himself friends with his housemaster and the school's librarian. And if that wasn't strange enough, he's been seeing the ghost of a very fair haired boy who--as it happens--he witnessed floating over Theo Ryder just before Andrew came upon the corpse of Theo.

That, is pretty much the extent of what I can tell you about the plot without giving you spoilers. I will say that there is a girl (Persephone Vine) who Andrew rather fancies and that she talks him into getting involved in the school play--which causes him to learn more about Lord Byron and thus about the ghost as well. Be warned though, there is some foul language in The White Devil as well as a few scenes that are sexual in nature (and a tad graphic). Because of this, I would not recommend this to readers who strictly prefer Young Adult novels. Yes, the main character in this book is a teenager, but it does contain some strong themes that personally, I wouldn't recommend for teens. This is adult level fiction, do not doubt it.

However, I must confess that I found The White Devil to be somewhat of a slow read. It doesn't precisely grip you in as I felt that it ought and well, the ending is certainly a twist that I didn't see coming. On the other hand, the cast of characters was certainly good--and very human for that matter (and by this, I mean to say flawed). Admittedly the term "cheese lungs" is stuck in my head at the moment due to The White Devil and well, after having health classes in which we watched videos of teens going to morgues to see what lungs look like after lung cancer, ah, well, I'm a bit squeamish about such things. The blood on the other hand did not bother me nearly as much as the lung bit did.

The White Devil was certainly a read and although I regret to say that I did not love it as much as I thought I would, it was certainly interesting--I mean, look at how much I ended up writing about it! If you can deal with some strong scenes and are intrigued by the plot though, then I would recommend that you pick up a copy and I'd personally love to hear what you thought of it.