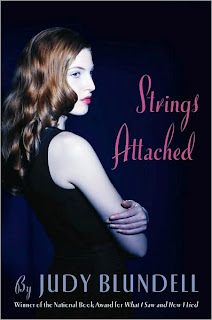 Summary from GoodReads:
When Kit Corrigan arrives in New York City, she doesn't have much. She's fled from her family in Providence, Rhode Island, and she's broken off her tempestuous relationship with a boy named Billy, who's enlisted in the army.

The city doesn't exactly welcome her with open arms. She gets a bit part as a chorus girl in a Broadway show, but she knows that's not going to last very long. She needs help--and then it comes, from an unexpected source.

Nate Benedict is Billy's father. He's also a lawyer involved in the mob. He makes Kit a deal--he'll give her an apartment and introduce her to a new crowd. All she has to do is keep him informed about Billy . . . and maybe do him a favor every now and then.

Never make deals with the devil. Someone should have told Kit Corrigan this when Nate (Billy's father) offers her an apartment. There's one small catch though, if she wants the apartment, she'll have to get back in contact with Billy and do a couple small favors for Nate. Having lived on someone's couch up until this point, Kit jumps on the offer. However, things don't go nearly as smoothly as she'd like.


Set in 1950, seventeen year old Kit Corrigan works as a chorus girl in a Broadway show that's so tiny that well, she's barely clinging onto her dream and she's pretty much a nobody in New York. When Nate re-enters her life, suddenly she becomes a somebody. She gets a job as a Lido girl (working at a nightclub and dancing), has her own apartment, and gets a brand new wardrobe. Finally, Billy comes back on leave and feelings inevitably resurface.

I'm really not sure how much I can say without giving some rather serious spoilers--which I'm trying not to do. Kit's life takes a series of twists and turns; but more importantly, she doesn't understand how close her family was/is to the Benedicts. I will say that Kit does end up doing some serious growing up within Strings Attached and that the romance--to me--felt like a sub-plot. Well, Kit's romance anyways.


With that said, if the plot intrigues you or you happen to like novels set during the 1950's, I'd recommend you give this book a go. Admittedly the cover doesn't scream 1950's to me although the black dress that she wears on the cover is symbolic and well, mentioned in the book. Kit isn't precisely the most dynamic character I've ever read about, but the normality is a nice change--every now and again. I know, I know, I should be mentioning--vaguely--the ending as well. Pretty much all that I can and will tell you is that it does wrap things up nicely.