Back When You Were Easier to Love by Emily Wing Smith

Back When You Were Easier to Love
Author: Emily Wing Smith
Publisher: Dutton Children's Books (a part of Penguin Group)
Release Date: April 28, 2011
Edition: ARC
* Picked up at ALA Midwinter. 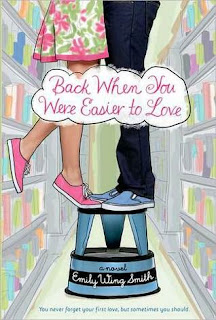 Summary from GoodReads:
What's worse than getting dumped? Not even knowing if you've been dumped. Joy got no goodbye, and certainly no explanation when Zan—the love of her life and the only good thing about stifling, backward Haven, Utah—unceremoniously and unexpectedly left for college a year early. Joy needs closure almost as much as she needs Zan, so she heads for California, and Zan, riding shotgun beside Zan's former-best-friend Noah.
Original and insightful, quirky and crushing, Joy's story is told in surprising and artfully shifting flashbacks between her life then and now. Exquisite craft and wry, relatable humor signal the arrival of Emily Wing Smith as a breakout talent.

I don't like Zan. Yes, that was my first thought upon finishing Back When You Were Easier to Love. Why? Because there's the version of Zan that Joy fell in love with and then there's the real Zan--who is not a nice person. But it's the idealized Zan that Joy is in love with and when he leaves her in the dust to head to California, she can't come to terms with it. After all, he's left without saying a word to her and he's left her no way to get in contact with him. Joy is sure that if she goes to see him, things will work out and they'll still be together--which is precisely why she decides to go to California on a road trip with Zan's ex-friend Noah.

Your first love really is difficult to lose and I can see how Joy feels that she needs to see Zan again to get "closure" on their relationship. However, she seems a bit extreme to me--having envisioned their reunion and talking about Zan so often that even her friends and Noah want her stop. The thing that I least liked about Joy though, would have to be her judgmental attitude. She thinks that Noah is a stereotypical Soccer Lovin' Kid--her term for the popular kids in Haven--and up until their road trip, she pretty much refuses to get to know him regardless of his efforts to try and get to know her. To me, it came off like Joy was refusing to let Noah redeem himself--having decided that he was the embodiment of the reason why Zan left Haven in the first place. With that said, I did love Noah and as far as I'm concerned, he was the star of Back When You Were Easier to Love simply because he put up with Joy. Not only does he put up with her, but he defends her to Zan--well, saying much more than that would be giving spoilers and you know how I feel about spoilers.