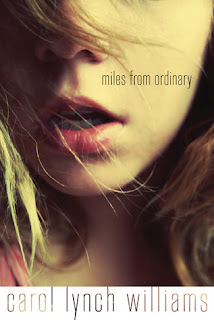 Summary from GoodReads: Thirteen-year-old Lacey wakes to a beautiful summer morning excited to begin her her job at the library, just as her mother is supposed to start work at the grocery store. Lacey hopes that her mother's ghosts have finally been laid to rest; after all, she seems so much better these days, and they really do need the money. But as the hours tick by and memories come flooding back, a day full of hope spins terrifyingly out of control...

At the age of thirteen, would you care for your ailing mother on your own? Could you endure your classmates and the whispers around town? Lacey has been putting up with it for years and although things haven't been as bad as they've been before--for her mother--it's a far cry from the road to recovery. When summer comes, Lacey manages to convince her mother to apply for a job as a cashier at the local grocery store and she applies to work at the library over the summer. And although she loves books, it's not the reason behind why she decided to work at the library; her aunt Linda is the reason behind this decision. Why? Because she used to work at Peace City Library and Lacey is hoping to see her again. The reason behind why she hasn't seen her aunt is, well, her mother. Lacey's mother drove her out of the house and thus, their lives for the most part.

The entire story takes place over the course of a single day--with flashbacks and memories as well, but the bulk of events transpire on a single day--and what a day it is. I won't go into details because it'd give a lot away, but let's just say that it has to have been one of the most stressful days in Lacey's young life. Lacey herself is extremely strong as she's been dealing with her mother for years and having her aunt forced away hasn't exactly made things any easier. She wants to have friends and to have a normal life, but she accepts her situation and deals with it as best she can. Her mother hears and sees Lacey's grandfather and will often tell Lacey that her grandfather told her to do something or that her grandfather wouldn't like it. The thing is, Lacey's grandfather is dead which means that well, her mother's ghosts is quite literally a ghost. I really can't say much more than that without spoiling things for you, so I'll just say one more thing; there is a scene in this book that translated Lacey's fear so well that I didn't want to read about what she saw--although obviously I did and it did play a big part in the ending.

Miles from Ordinary isn't a particularly long read, but if the plot sounds like your sort of thing or you're intrigued, I'd suggest picking up a copy to read. It did take a turn several times that I had not been expecting and the ending was, in my opinion, the perfect outcome.