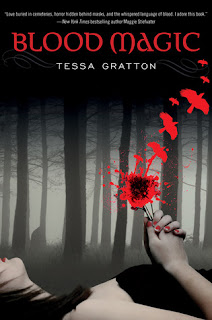 Summary from GoodReads:
For Nick Pardee and Silla Kennicot, the cemetery is the center of everything.

Nick is a city boy angry at being forced to move back to the nowhere town of Yaleylah, Missouri where he grew up. He can’t help remembering his mom and the blood magic she practiced – memories he’s tried for five years to escape. Silla, though, doesn’t want to forget; her parents’ apparent murder-suicide left her numb and needing answers. When a book of magic spells in her dad’s handwriting appears on her doorstep, she sees her chance to unravel the mystery of their deaths.

Together they plunge into the world of dark magic, but when a hundred-year-old blood witch comes hunting for the bones of Silla’s parents and the spell book, Nick and Silla will have to let go of everything they believe about who they are, the nature of life and death, and the deadly secrets that hide in blood.

Why am I looking forward to Blood Magic? I love the concept of blood magic--and well, different types of magic in general--and overall the storyline sounds interesting. Being pursued by a blood witch? Said witch is after bones of girl's parents and their spell book? Sold. Also, it doesn't sound like a romance--at least from the summary--so I think it'll be a nice change of pace for me. I mean, I love romances, but sometimes even I need a break from them.

Blood Magic has an expected publication date of April 26, 2011 and is published by Random House for Young Readers.

So, what are you waiting on this Wednesday?
Posted by Kristin @ Beneath Shining Stars at 12:43 AM