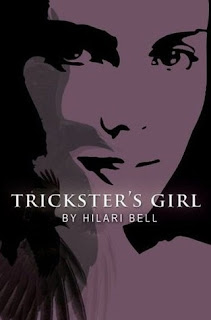 Summary from GoodReads: In the year 2098 America isn't so different from the USA of today. But, in a post-9/11 security-obssessed world, "secured" doesn't just refer to borders between countries, it also refer to borders between states. Teenagers still think they know everything, but there is no cure for cancer, as Kelsa knows first-hand from watching her father die.

The night Kelsa buries her father, a boy appears. He claims magic is responsible for the health of Earth, but  human damage disrupts its flow. The planet is dying.

Kelsa has the power to reverse the damage, but first she must accept that magic exists and see beyond her own pain in order to heal the planet.

Kelsa Phillips has just lost her father to cancer when she meets Raven, the boy who seems to suddenly appear out of nowhere and tells her that magic exists--and more importantly, he needs her to help him heal the ley lines which have been severely weakened by humanity. To say the very least, she's skeptical but finally agrees to help him heal at least one ley line. From there, their journey takes them through Utah, Montana, up into Canada, and finally over to Alaska. It really does feel like you're taken along on their road trip as Kelsa tries to aid in stopping the tree plague--which started in a small patch of the Amazon and has just recently been spotted beginning in Mexico as well.

If you're looking for a romance, this isn't it. More or less, this is an adventure--and one which I found to be rather interesting. With that said though, my one major gripe was that it seemed almost too short. And then of course there is the fact that although Kelsa's role is over, Raven still has more work to do--literally--and with only days to spare. On the other hand, Hilari Bell's writing style really let you picture your surroundings and I loved the incantations that Kelsa came up with. As a story, it certainly had potential, I only wish that the ending had been more fulfilling.