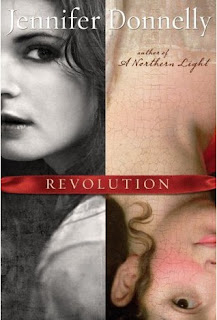 Summary from GoodReads: BROOKLYN: Andi Alpers is on the edge. She’s angry at her father for leaving, angry at her mother for not being able to cope, and heartbroken by the loss of her younger brother, Truman. Rage and grief are destroying her. And she’s about to be expelled from Brooklyn Heights’ most prestigious private school when her father intervenes. Now Andi must accompany him to Paris for winter break.

PARIS: Alexandrine Paradis lived over two centuries ago. She dreamed of making her mark on the Paris stage, but a fateful encounter with a doomed prince of France cast her in a tragic role she didn’t want—and couldn’t escape.

Two girls, two centuries apart. One never knowing the other. But when Andi finds Alexandrine’s diary, she recognizes something in her words and is moved to the point of obsession. There’s comfort and distraction for Andi in the journal’s antique pages—until, on a midnight journey through the catacombs of Paris, Alexandrine’s words transcend paper and time, and the past becomes suddenly, terrifyingly present.


Admittedly, at the beginning of Revolution, I was not in love with Andi's character. Why? Because she struck me as jaded and the constant, "I'm the one who killed my brother!" wasn't exactly fun either. However, if you are faced with this same problem, read on, for things to get better once she gets to Paris. Once she arrives in Paris, her father (whom dragged her along, so to speak) gets to work on DNA testing on a piece of what is believed to be the Dauphin of France's (Louis Charles) heart. Things get interesting once Andi discovers the hidden panel of the guitar case that her father's friend had been unable to open and the diary inside.


After that, we are introduced to Alex, a girl who lived through the beginning of the Revolution and who dreamed of performing on the stage. However, instead of doing this, along with her family, she puts on puppet shows; one of which, the royal family happens to see and because she manages to make Louis Charles laugh, her life changes in ways she never would've imagined before. When Louis Charles and his family are put under house arrest, Alex will do anything to keep the little Dauphin laughing and ultimately, this is her downfall.


Alright, between the diary and Virgil, who Andi meets in Paris, Andi becomes a better person. Or, well, she begins to stop dwelling on her brother's death and she actually begins to live life a little. If it wasn't for him, I would've given up hope for Andi and probably have put the book away for a while. After all, moping teens are generally not my thing. Her other saving grace--as far as I'm concerned--would have to be her friend Vijay who just had so many nicknames for his mother that I found myself looking forward to when he would pop up in the story. My other favorite part of the story would have to be Alex's interactions with Louis Charles and if you read Revolution, I hope you'll understand why.


If you like the sound of the storyline, I'd suggest that you give this book a go and perhaps even if you're a little skeptical, like I was. Seriously though, once Andi gets to Paris, the storyline--in my opinion--improves and the ball really starts to roll.