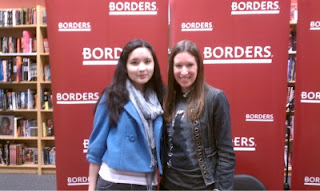 I know, I know, I'm a little late to post this--since well, this was on Friday and it's not Friday anymore. Anyways! Admittedly it was a bit on the small side--but hey, we're Torrance, we're not precisely a large town and well, not everyone knows where Torrance is to begin with. I'm also going to admit that I'm pretty much socially awkward and thus, there were no questions coming from me during the discussion. Lauren read from the prologue of Torment and from there, launched into questions--I'm also probably forgetting a bunch of what actually happened (I really need to write things down to remember it all).

Originally, Fallen was going to be a three book series although well, that obviously isn't the case anymore. Now, after Torment, we'll have Passion followed by... Rapture! And then there was talk about the covers and Lauren told us that the cover model was also the photographer--and that said photographer also does her photoshopping on her own. Someone also asked if we'd ever get to see the model's face and Lauren explained that she liked how the covers didn't show the model's face because then the reader could imagine how Luce looks on their own. Admittedly, again, I'm probably forgetting a lot of the other questions--like "What character speaks to you the most?" I believe the answer was Arriane and the reason? Because she's a loud mouth.

And regrettably, I'm blanking right now. However, if Lauren is coming to a bookstore near you, definitely go! Seriously, I think everyone should attend a book signing because it's really neat to meet the author(s) of your favorite book(s). Also, sorry about the small-ish picture. xD I'd make it bigger--and I could--but I thought the size was decent. Yes, that's me on the left--with the silver scarf. Anyways, tadah!

Have you ever attended a book signing? If not, whose signing would you want to go to?
Posted by Kristin @ Beneath Shining Stars at 9:16 PM