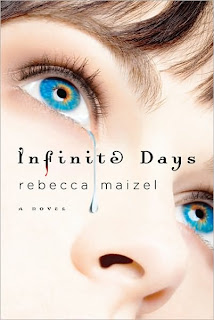 Summary from GoodReads: Lenah Beaudonte is, in many ways, your average teen: the new girl at Wickham Boarding School, she struggles to fit in enough to survive and stand out enough to catch the eye of the golden-boy lacrosse captain. But Lenah also just happens to be a recovering five-hundred-year-old vampire queen. After centuries of terrorizing Europe, Lenah is able to realize the dream all vampires have -- to be human again. After performing a dangerous ritual to restore her humanity, Lenah entered a century-long hibernation, leaving behind the wicked coven she ruled over and the eternal love who has helped grant her deep-seated wish.

Until, that is, Lenah draws her first natural breath in centuries at Wickham and rediscovers a human life that bears little resemblance to the one she had known. As if suddenly becoming a teenager weren’t stressful enough, each passing hour brings Lenah closer to the moment when her abandoned coven will open the crypt where she should be sleeping and find her gone. As her borrowed days slip by, Lenah resolves to live her newfound life as fully as she can. But, to do so, she must answer ominous questions: Can an ex-vampire survive in an alien time and place? What can Lenah do to protect her new friends from the bloodthirsty menace about to descend upon them? And how is she ever going to pass her biology midterm?

You know how there are certain books that you're not too sure that you'll like? Yeah, this was one of them. Did I like it? You bet I did! But really, I wasn't too sure what to think of a story about a vampire (who has been around for about five hundred and ninety two years) who gets to become human. Did the storyline work? Yes it did.

Lenah Beaudonte, like many other vampires, longed to become human again. To be able to feel, well, alive again. When confronted with the opportunity to regain her humanity, Lenah agrees to hibernate for one hundred years and her lover/best friend/maker (Rhode) agrees to aid her in the ritual as long as she agrees to the hundred year hibernation. Needless to say, she does it and the story begins with her waking up as a human. Now, don't get me wrong, the entire story is not simply just her adjusting to her new life, it's also filled with flashbacks to her old life with the coven and there's the fact that they're bound--literally bound--to come looking for her. The world through Lenah's eyes is a gorgeous place and for her, this really is the first time she's well and truly seeing the world. Of course, then there's also the fact that she's been hibernating for the past hundred years and technology is somewhat of a foreign concept that she has to get used to.

Favorite minor character? Tony--so you can sort of guess how I felt later on in the book (if you've read it and if you haven't, I can't tell you what I'm talking about, even though I really want to). Also, I'm so torn between the three guys still actively in Lenah's life! Sure, Justin makes her feel alive again and he's not a bad guy; however, Rhode has been with Lenah since the beginning and he was the one willing to make the sacrifice for her. Lastly, there's Vicken--whom I would totally fall for--who met Lenah outside of a tavern a long while ago and became a vampire so that he could stay with her. Also, did I mention that Vicken in Scottish? Why hello there hot guy with extremely sexy accent; if Lenah won't take you, I sure will!

Also, Rebecca's take on vampires is somewhat different than the norm. Yes, they'll burst into flames and die a painful death if they're out during the day; but at the same time they can't tell the texture of a fabric and after a while, they start to lose their humanity. Oh, and they're also kept 'alive' by black magic--which I found to be pretty interesting.

Can you tell that I really enjoyed Infinite Days? Because I definitely did and if you've been waffling about picking up a copy, I'm going to gently nudge you towards the bookstore. The pacing really is wonderful though and just as things start to calm down in Lenah's life, they tend to pick right back up again and things just continue to build and build until towards the end of the book. Ah, also, I regret reading the first chapter of Stolen Nights now because let's face it, reading that teaser just makes it that much more difficult to wait until the book's release--which is March 15, 2011 (cue the impatient "I want to know what happens next!" dance).


Favorite Quote:
"You're saying that deciding to be human again after six hundred years as a ruthless vampire is like bungee jumping?" - pg. 207
Overall Rating: ★★★★★
Posted by Kristin @ Beneath Shining Stars at 1:29 PM