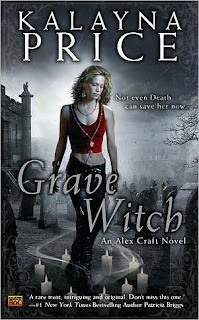 Summary from GoodReads: As a private investigator and consultant for the police, Alex Craft has seen a lot of dark magic. But even though she’s on good terms with Death himself—who happens to look fantastic in a pair of jeans—nothing has prepared her for her latest case. Alex is investigating a high profile murder when she’s attacked by the ‘shade’ she’s raising, which should be impossible. To top off her day, someone makes a serious attempt on her life, but Death saves her. Guess he likes having her around…

To solve this case Alex will have to team up with tough homicide detective Falin Andrews. Falin seems to be hiding something—though it’s certainly not his dislike of Alex—but Alex knows she needs his help to navigate the tangled webs of mortal and paranormal politics, and to track down a killer wielding a magic so malevolent, it may cost Alex her life…and her soul.


Alex Craft is a grave witch; someone who can raise shades (which essentially are the last living memories of the dead that get put back into their corpses) and in her particular case, see Death. Yes, Death is a person--or more specifically, a man (whom, as stated in the summary, looks very good in jeans). Downright broke and in need of work, Alex takes up her sister on a job opportunity which leads her to ask a cop buddy for a favor which then leads her to the morgue where she raises a shade (pro bono) for said cop that then attacks her. She also takes a peek at Theodore Coleman's body--which was why she came to the morgue in the first place--and notices a series of strange symbols on his skin (which is relevant, but there's plot spoilers I'd rather not give). Shortly after this, a certain detective--Falin Andrews--makes his appearance and well, he doesn't like Alex--then of course, there's the fact that she was just looking at Theodore's body which is a part of his case. From there, the story really begins to roll along and little by little, Alex learns more about the case and unintentionally she learns an interesting bit of information about herself (and what the victims all had in common).

Yes, this is an Adult book. Yes, there is a scene--intimate in nature--within. But it was just one scene and to be honest, things like that don't bother me--sometimes, instead, I burst out with, "Finally!" What I mean to say is this: as long as the plot is good and there's not a ton of scenes of that nature, I'm game. However, I won't tell you who it was with--although I will tell you that the love triangle is pretty interesting. I mean, Death versus Falin Andrews? For once, I have absolutely no idea who I'm really rooting for--well, okay, I'm siding with Falin thus far. Then there's Alex's grave sight which literally gives her a different perspective of the world (think more decay) and the fact that it leaves her blind (legally blind or pretty close to it) after she's finished using it--it also leaves her extremely cold when she's done using it. Since well, the grave is cold and people who are currently amongst the living tend to be warm to the touch (Death can attest to this).


Anyways, if you like urban fantasies, witches, corpses, a string of murders, and the occasional fae you may want to check this one out. Also, admittedly, this was somewhat of a fast read--it's a standard sized paperback and by this, I don't mean the over-sized ones that I've been reading lately. Not a "I have to know what happens next!" book, but more or less a "This is rather interesting." book.

P.S. The quote on the cover? ("Not even Death can save her now.") It's extremely accurate--as it should be. Death literally cannot save her from the curse/spell/thing that is eating away at her soul. More than that, I will not say. ;D